RM105: Jailhouse Snitches Are Not A Safe Way To Run An Institution

RM105: Jailhouse Snitches Are Not A Safe Way To Run An Institution 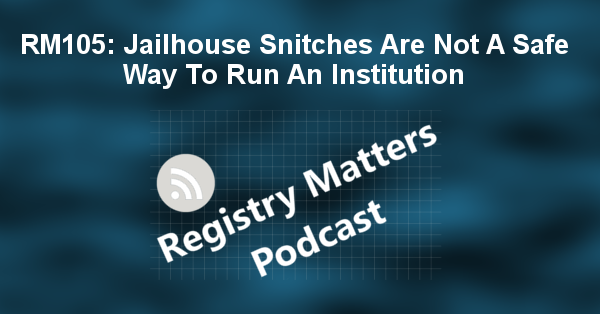 Transcript of RM105: Jailhouse Snitches Are Not A Safe Way To Run An Institution

Welcome to Episode 105 of Registry Matters. We loaded up the show with so much stuff to cover, there will be a patreon extra segment with a fair amount of extra stuff to dive into. If you want to gain access this extra contact, just $1 will unlock this over at https://www.patreon.com/registrymatters

We begin with a little tongue and cheek conversation about registering when traveling. Each state has their own requirements and we poke fun at the idea that they somehow know you’re there past the limit, whatever that is. And Andy’s plane was an hour delayed pushing him right up to the limit of Pennsylvania; which is 7 days.

GPS ankle monitors are very troubling. You’re essentially handcuffed  With them failing so easily, your liberty is in jeopardy if this technology fails. If the technology is used as an alternative to being in detention, jail costs $90 per day, more or less depending on location. And the GPS monitor costs $300 per month. My math isn’t great, but I think $90 per day is significantly more than $300 per month.

A man in Coral Gables requests the records from the city regarding the traffic cameras in the city. He receives 80 pages of data with his whereabouts far beyond their need to perform safety at intersections. You have the expectation that the government is not tracking your movement. You have the freedom of expression and freedom of assembly and all that constitutional mumbo jumbo. This is potentially a 4th amendment violation of unreasonable search. And also a 1st amendment violation since you might alter your assembly knowing the cameras are there.

Pennsylvania creates a degree of things that were already illegal, more illegal so to speak. Things like blackmail or extortion which are already illegal. Adding these new offenses is probably unnecessary because the prosecutorial tools already existed. This is essentially a law maker doing something that will be very popular, and have unanimous support but will have limited impact in the grand scheme of things.

Private prisons are a really bad idea. The idea that the profit margin of a company is based on the efficiencies related to the treatment of humans. From the corporate point of view, their shareholders are the benefactors, the corporation will cut all of the corners to be profitable at the expense of the humans.

Wrongful convictions happen all too regularly in our system. We make the assumption that when there is an accusation that the accusation is true. The person on the receiving end of the accusation may spend an enormous amount of time in a cage. We should take an extreme level of care in determining that a person is actually guilty.

Jailhouse snitches have an incentive to create erroneous information about people within the walls of prison or jail. A snitch system is not a safe way to run an institution. It is a highly unethical process that could yield false accusations leading to more time for innocent people, costing tax payers a great deal of money.

The legislative branch ties the hands of the judicial branch when they impose mandatory minimum sentences. A judge is the just that: a judge. A judge is presented with the facts of the case. They generally hear the evidence of the case by both sides: the prosecutor and the defense. They hear the witness testimony. We don’t want judges being legislators. It would then seem that we don’t want our legislators being judges either.

A plea of misdemeanor years in the past can absolutely impair your ability to get a job in the future. Often times people are in jail for a minor crime and the person wants so desperately to get out and go home. They plead out to some misdemeanor. Without proper counsel, they are totally unaware of the long term ramifications of the decision. Montgomery County Maryland adopts anti-bias policies for those with records which is a good thing.

It is an exceedingly rare event that a full circuit court hears a debate. This case involves correction officer misconduct that caught the attention of the entire 7th circuit court. The inmates in your charge are not there for your pleasure.

An 8 year old girl visiting her father in prison gets strip searched. It appears as though it was non-contact visitation anyway. The search yielded no contraband anyway. The governor has called for an investigation.  It also appears as there is policy to prevent the searches. The girl tells her mom that they made her take off all of her clothes. Shouldn’t the officer use some level of humanity that you don’t subject a child to a strip search. Now there will have to be a law put in place to actually make it so that officers don’t have a tool to use to strip search a child.

A 16 year old dies at the hands of the police after being tazed. It appears as though the police are stonewalling what happened. And regardless of this – the very instant that the boy was in the water and crying for assistance, the police should have moved into a protect and serve posture. At the point the boy was in the water, it seems unlikely that he would have been able to flee. And if so, not very far. The police have vast resources to call in additional support.

A family does nothing wrong except for bringing their child to the doctor. The doctor mistakenly identifies the child as being abused. What happens next is horrifying. Child protective services removes the child from the home. The parents have done nothing wrong. They were not offered any level of due process. Eventually, in court, the judge says “I’m sorry this happened” and their child was returned home. It is a terribly disturbing situation that the couple did everything right, but still had to spend thousands of dollars in legal representation.

Just catching up on older episodes. Listening to 100 now. On the Halloween sign part. Not sure if this was argued or if it matters in Georgia. In New Jersey, a judge has a hearing to determine what tier a SO must be classified as. Tier 3 requires community notification. Tier 2 is  only schools, day care, etc. Tier 1 is law enforcement only. If a sheriff requires that a SO warning Halloween sign be posted in front of a house for a Tier 1 or 2 person wouldn’t that be violating an order of the court?

Consider that a listener question for Larry. One more… How can NJ deny bail to everyone through a recent law and still be considered constitutional. Not many are fighting about it. While it may be a better option for some, bail is specifically addressed in the United States constitution.

3 comments on “RM105: Jailhouse Snitches Are Not A Safe Way To Run An Institution”