RM104: I Got My Rights Because I’m A Police Officer 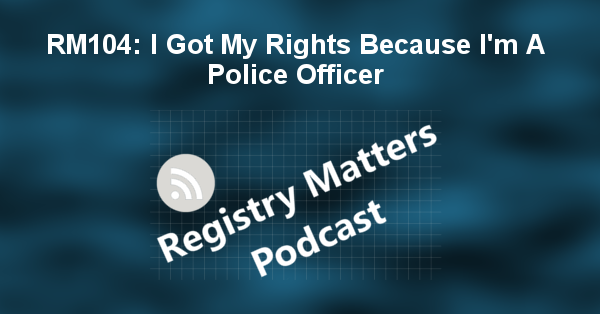 Read the transcript of RM104: I Got My Rights Because I’m A Police Officer

We are happy to bring you this post Thanksgiving episode of Registry Matters. We were thankful to be joined by a bunch of people during the live stream too. I’m thankful for that 🙂 We tried to keep it a bit lighthearted on the heels of the holiday to poke fun at a not so funny situation where an off duty cop “harassed” some shoppers, which is where the title comes from “I Got My Rights Because I’m A Police Officer”

We start with a question about the various cease and desist letters being sent in New Mexico primarily to the sheriffs offices. What is the reasoning behind them being sent.

Another listener question that came from RM103 about “when does the 15 year clock start”? In-the-Matter-Of-Registrant-H.D._New Jersey Superior Court 2018. The listener had challenges finding any consensus with the various attorneys that they questioned.

Man spends over 200 days in jail/prison for multiple drug tests that were flawed; Kentucky governor pardons a man after the victim, who was 6, recants her tesimony; Holding old people in prison is a really expensive proposition;

[20:50] https://reason.com/2019/11/25/kavanaugh-joins-gorsuch-in-fight-to-revive-nondelegation-doctrine/
Justice Kavanaugh joins Justice Gorsuch with a trial balloon in a denied cert to SCOTUS;

[24:45] https://thehill.com/homenews/state-watch/472110-pennsylvania-enacts-law-ending-time-limits-for-criminal-civil-action-in
Pennsylvania is the latest state to remove the statute of limitation – pushing felonies out to infinity

[29:55] https://www.propublica.org/article/these-judges-can-have-less-training-than-barbers-but-still-decide-thousands-of-cases-each-year
In South Carolina, Magistrate judges have minimal training and then oversee thousands of cases per year – often violating constitutional rights of those before the court

[37:50] https://news.bloomberglaw.com/us-law-week/california-cops-barred-from-warrantless-vehicle-searches-for-id
The police are barred from performing warrantless searches. We don’t jettison the constitution for convenience

[40:30] https://theappeal.org/in-missouri-public-defenders-push-to-put-poor-defendants-on-wait-list-in-attempt-to-improve-their-legal-representation/
Public defenders in Missouri face a crushing caseload when trying to provide council to those needing public defender services

[46:20] https://theappeal.org/malcolm-jenkins-fraternal-order-police/
The Fraternal Order of the Police attack those that challenge them – they perform personal attacks for being questioned

[49:45] http://www.nydailynews.com/new-york/ny-new-york-prison-lawsuit-false-positive-drug-tests-20191126-tgj6bep7cfgmrnu3mr5v5tcy3e-story.html
Anthony Cortes was just about to be released from his drug treatment program when he came up positive on a drug screen. He is ejected from that program, and ends up spending 200 days in jail and prison, and even solitary confinement. All the while knowing he was clean of drugs and innocent. The drug tests were eventually found to be flawed.

[57:55] https://thehill.com/homenews/state-watch/471918-kentucky-governor-pardons-man-serving-life-sentence-for-sexually-abusing
Kentucky governor pardons a man who, it turns out, was falsely convicted in 2001 and serving a life sentence

[1:00:45] https://theappeal.org/the-costs-of-not-releasing-people-from-prison/
The elderly folks that are incarcerated cost a whole lot of money and they’ve probably aged out of the criminal mindset. Let them go home.

[1:04:35] https://www.washingtonpost.com/immigration/2019/11/27/ice-set-up-fake-university-then-arrested-people-it-gave-student-visas/
Immigration and Customs Enforcement set up a university to ensnare individuals trying to stay in the United States past their allowed time

[1:10:00] https://youtu.be/S0EHWgR6yVU
We have fun in this segment with an off-duty cop that appears to be profiling two shoppers “who didn’t look right”. The officer never articulates why they looked suspicious or anything of the sort.